Interesting article written in 2008. It has since been recognized that sometimes founders remaining as CEOs are good with less percentage of control. Class B common stock allows shareholders with 10 votes per share and it is used by Google or Facebook, but that too is being questioned today.

When I analyzed 212 American start-ups that sprang up in the late 1990s and early 2000s, I discovered that most founders surrendered management control long before their companies went public. By the time the ventures were three years old, 50% of founders were no longer the CEO; in year four, only 40% were still in the corner office; and fewer than 25% led their companies’ initial public offerings.

Early days of a corporation

At the start, the enterprise is only an idea in the mind of its founder, who possesses all the insights about the opportunity; about the innovative product, service, or business model that will capitalize on that opportunity; and about who the potential customers are. The founder hires people to build the business according to that vision and develops close relationships with those first employees. The founder creates the organizational culture, which is an extension of his or her style, personality, and preferences. From the get-go, employees, customers, and business partners identify start-ups with their founders, who take great pride in their founder-cum-CEO status.

Founders eventually realize that their financial resources, ability to inspire people, and passion aren’t enough to enable their ventures to capitalize fully on the opportunities before them. They invite family members and friends, angel investors, or venture capital firms to invest in their companies. In doing so, they pay a heavy price: They often have to give up total control over the enterprise.

Success marks an end of an era

Their success makes it harder for founders to realize that when they celebrate the shipping of the first products, they’re marking the end of an era. At that point, leaders face a different set of business challenges. The founder has to build a company capable of marketing and selling large volumes of the product and of providing customers with after-sales service. The venture’s finances become more complex, and the CEO needs to depend on finance executives and accountants.

Skills of the CEO evolves. Recognize the base rates as opposed to one-off Bill Gates or Steve Jobs

A technology-oriented founder-CEO, for instance, may be the best person to lead a start-up during its early days, but as the company grows, it will need someone with different skills. Indeed, in analyzing the boards of 450 privately held ventures, I found that outside investors control the board more often where the CEO is a founder, where the CEO has a background in science or technology rather than in marketing or sales, and where the CEO has on average 13 years of experience.

Thus, the faster that founder-CEOs lead their companies to the point where they need outside funds and new management skills, the quicker they will lose management control. Success makes founders less qualified to lead the company and changes the power structure so they are more vulnerable.

Then it usually takes two or three rounds of financing before outsiders acquire more than 50% of a venture’s equity. In such cases, investors allow founder-CEOs to lead their enterprises longer, since the founder will have to come back for more capital, but at some point outsiders will gain control of the board.

This fundamental tension yields “rich” versus “king” trade-offs. The “rich” options enable the company to become more valuable but sideline the founder by taking away the CEO position and control over major decisions. The “king” choices allow the founder to retain control of decision making by staying CEO and maintaining control over the board—but often only by building a less valuable company. 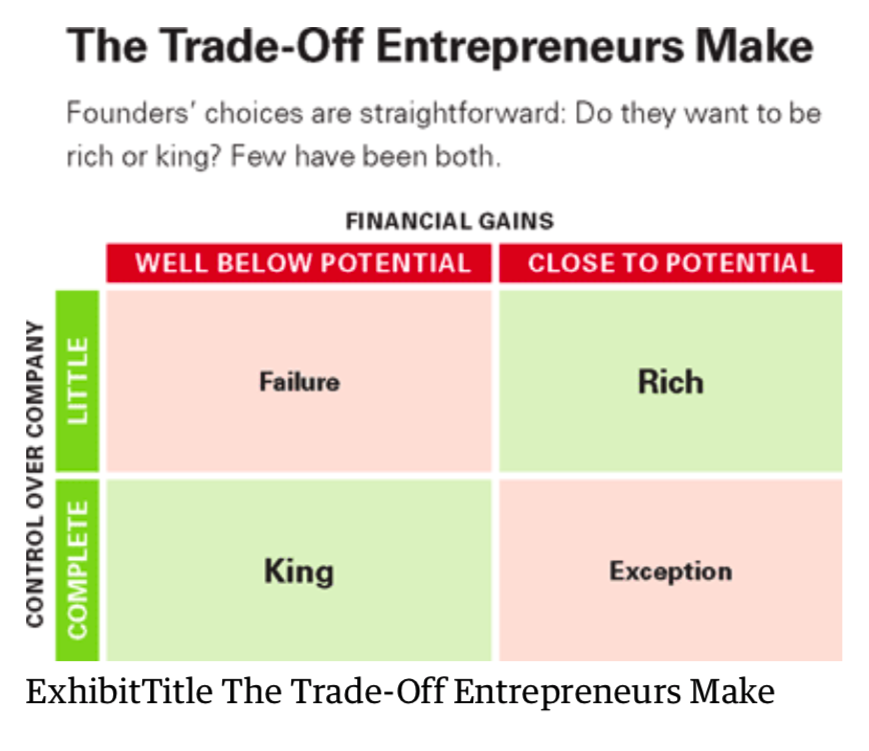 On the other side of the coin are founders who bootstrap their ventures in order to remain in control. For instance, John Gabbert, the founder of Room & Board, is a successful Minneapolis- based furniture retailer. Having set up nine stores, he has repeatedly rejected offers of funding that would enable the company to grow faster, fearing that would lead him to lose control.

Founders who understand that they are motivated more by wealth than by control will themselves bring in new CEOs.

By contrast, founders who understand that they are motivated by control are more prone to making decisions that enable them to lead the business at the expense of increasing its value. They are more likely to remain sole founders, to use their own capital instead of taking money from investors, to resist deals that affect their management control, and to attract executives who will not threaten their desire to run the company.

When to chose control…

Those desiring control should restrict themselves to businesses where they already have the skills and contacts they need or where large amounts of capital aren’t required.

When to chose wealth…

Founders who want to become wealthy should be open to pursuing ideas that require resources. They can make the leap sooner because they won’t mind taking money from investors or depending on executives to manage their ventures.

What does success mean to founders?

Choosing between money and power allows entrepreneurs to come to grips with what success means to them. Founders who want to manage empires will not believe they are successes if they lose control, even if they end up rich. Conversely, founders who understand that their goal is to amass wealth will not view themselves as failures when they step down from the top job.